Technology have helped us to accomplish different types of tasks easier and quicker. Computers gave a significant contribution to people in different industries, and it continues to be evolving from time to time. As computers continue to evolve, different software applications that are developed are vulnerable to security threats. Aside from making our lives easier, there are software applications that are intended to give harm to our computers. This type of software application is called a malicious software, each of its several types behave differently from each other. Among this type of malicious software, the common type that most of us have heard are computer viruses.

A computer virus is a type of malicious software that is self-replicating, and infects computer files throughout a computer system. As it replicates, it will explore system files and corrupt files stored in the computer, making them unusable. Viruses usually attach themselves to files that are executable (.exe file extension). It can also infect documents and databases that contains important data. The worst viruses infects system files that is responsible for the functions of an operating system. Throughout the years, there are a lot of computer viruses that infects several personal and business computers and made millions of dollars of damages. They are first spread by removable media, particularly floppy disks (diskettes). This diskettes are the means of passing data and information. The level of threat that computer viruses brought became much higher when computer networks and the internet was evolved. Here is a discussion of the recent list of the top 10 worst computer viruses of all time.

In number 10 of the list is the Melissa Virus, a type of virus that is targets Microsoft Office files. This is developed by David L Smith, and named the virus “Melissa” in memory of a lap dancer that he met. The Melissa virus is spread through mass sending of electronic mails (emails) through different people. When a user opens the email, downloads the attachment and opens it, the virus will target files related to Microsoft Word 97 / Microsoft Word 2000, and mass-send emails to the first 50 entries of the address book of your email. Developer David Smith was later arrested, fined a whopping $5000 and spent 20 months in Jail.

In number 9 of the list is the ILOVEYOU virus. This type of Virus attacked millions of Windows computers and causes millions of dollars in damages. It was developed by a developer from the Philippines. It spread throughout an electronic mail, and contains a file attachment called “LOVE-LETTER-FOR-YOU.txt.vbs”. If you received the attachment, the vbs file extension will not appear, and you will be mistaken it as a simple text file, and you will surely be curious to open it. The function of the Visual Basic script is to send the same email message to 50 email addresses from your contacts. As the virus looks harmless at first look, many people opened the attachment and was easily spread throughout corporate email systems.

In number 8 of the list is the Klez Virus, which is spread through electronic mail and infects Windows System files. The email takes advantage of a vulnerability in the Internet Explorer before, wherein the email client will automatically execute the virus without the user even downloading the attachment of the email. As the other viruses does, the Klez searches for contacts and self-replicates itself. 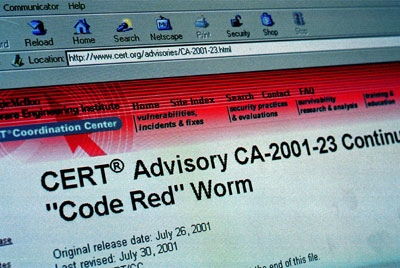 In number 7 of the list is the Code Red virus. It is considered to be one of the most dangerous virus, because it attacks the web servers of Microsoft. It works by taking advantage of the buffer overflow vulnerability, and displays the message “HELLO!  Welcome to the http://www.worm.com! Hacked By Chinese!” Code Red II is a variant of the said virus, but instead of attacking, it opened a backdoor to make the target computer vulnerable to other attacks

In number 6 of the list is Nimda, a type of virus that is said to quickly spread throughout the internet in just 22 minutes. It can either be spread through email, through network shares, through opening and browsing compromised web sites, or through the backdoor left by Code Red II. The name comes from reversing the word “admin”. Because the virus can be spread through different means, nimda made $620 million worth of damages throughout its existence

In number 5 of the list is the SQL Slammer, which is still existing till now. It made denial of service attacks on some internet hosts, which resulted to a huge decrease of internet traffic. It also took advantage of the buffer overflow vulnerability, wherein it sends random Internet Protocol (IP) addresses to different internet hosts, and if it happens that the address runs a Microsoft SQL Server Resolution service that is unpatched, the host will spread the virus throughout other hosts.

In number 4 of the list is the MyDoom virus, which is also a type of virus that spreads through the internet. A file attachment in the email was automatically downloaded when the email is opened, and automatically executes to spread through different contacts in the email. Aside from this, it can also share programs from a Windows pc to another Windows pc.

In number 3 of the list is the sasser, which specifically targets computer units that runs on a vulnerable version of both Windows XP and Windows 2000. It spreads through a network port that is said to be vulnerable to attacks. It is said to be dangerous because using the network port as a means to spread the virus means that it can spread without user intervention. When a computer unit is infected with sasser, a pop-up window will appear, notifying that the system will start an irreversible shut down in 1 minute. The pop-up is called sasser as it is caused by the Local Security Authority Subsystem Service (LSASS).

Second in the worst computer viruses of all time is the Oompa-Loompa virus, or simply the “leap” virus.  The Leap virus file spread through ichat instant messaging. The file is called “latestpics.tgz”. The user should open the compressed file and open the executable inside the compressed file. When it executes, the virus will infect the system and will spread through the contacts in the ichat instant messaging. As the file is disguised as an image icon, anyone will not be aware that it is a virus.

The top in the list of the top 10 worst computer viruses of all time is the storm worm. It is spread through an email containing details on different types of news that will surely catch the attention of any recipient. It is the worst as it is delivered through 14 different email subjects and 18 unique executable files attached randomly in the email. When the attachment is opened by the recipient, it will cause some damage on the system files, and starts to continually damage important files and documents stored in the computer. It can also spread through bot net and through a rootkit. As it is still existing till today, it is considered the top 1 worst computer virus of all time.