The latest flagship of Samsung, the Galaxy S5, will enter the market in just a few months time to satisfy avid smartphone users.  Although many critics say that the Samsung Galaxy S5 bears no big difference than its predecessor, the Galaxy S4, its Korean manufacturer boasts that the newest addition to the Galaxy series focuses on the customers’ needs than just mere style.  Samsung’s “back to basics” tagline for the Galaxy S5 highlights tools such as a fingerprint scanner, heart rate monitor, pedometer, and topnotch camera to address consumers’ day-to-day needs.  The Samsung Galaxy S5’s scheduled release is on April 11 and pre-order statistics from a few of its official distributors and carriers suggest that this might be the highest selling unit from the Galaxy series.  The Samsung Galaxy S5 is packed with other interesting features, which are aimed to boost customer confidence.

To substantiate Samsung’s commitment in promoting consumer health and wellness, the Galaxy S5 is partnered with the Nike Gear Fit.  Of course, this accessory comes with an additional price and is not packaged together with the handset.  This Nike wristband measures heart rate and sends the data directly to Galaxy’s S-Health sensors.  It is packaged in a sleek curved AMOLED display and is included to Samsung’s unique line of accessories specific to Galaxy people. 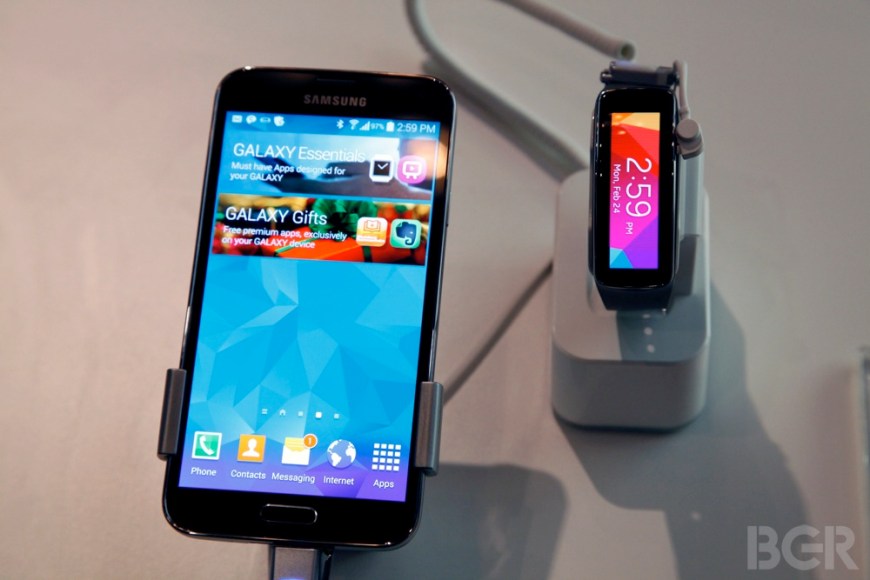 There is no significant improvement in Galaxy S5’s internal memory.  In fact, Samsung retained the standard 16/32 GB storage.  This can be really disappointing for Samsung fans who are expecting a larger space for their apps and files.  To counter this, Samsung built an external storage space that can hold up to 128 GB memory expansion.

Deviating from the typical Galaxy colors – black and white – the Samsung Galaxy S5 comes in four different variants namely the Charcoal Black, Shimmery White, Electric Blue, and Copper Gold.  The last one is exclusive only to Vodafone but Samsung is expecting that the Gold version would be very popular basing from the turnout of its pre-orders.

Contrary to the crowd’s expectation, Samsung Galaxy S5 is packaged with the typical plastic covering similar to that of the brand’s other mobile models.  Surprisingly, this newest Galaxy model is slightly heavier its predecessor, the S4.  This could have a negative impression against consumers’ enthusiasm but premature news says that Samsung is planning to release the Galaxy F, which is S5’s premium version, hopefully with the much-awaited metal casing.

Similar to that of iPhone 5S’ fingerprint sensor, Samsung also has its own version of the biometric scanner.  The S5 fingerprint scanner is located just below the Home menu and is used mainly as a locking device and an added security feature to the handset.  However, unlike Apple’s TouchID, Samsung’s fingerprint sensor is not a freeware and users can avail of it through Paypal payments.

Consumer health and wellness could be Samsung’s major advocacy for 2014 so they make sure that this is also reflective on their current and upcoming smartphone innovations.  However, Samsung’s S-Health proprietary application is not new as it is similar to Gear 2 and Gear 2 Neo.  The S Health 3.0 comes with a heart rate monitor and a pedometer whose data can be synchronized with the company’s Gear smartwatches exclusively available to Galaxy users.  Along with other fitness applications, Samsung’s goal is to provide consumers with enriched customized third party app ecosystem capable of real time fitness coaching.

According to Samsung, the Galaxy S5 camera should be one of greatest innovation in this handset.  The 16-megapixel camera is said to come in between Galaxy S4 and Note 3, which were both excellent photo and video shooters.  In addition to this, the Samsung Galaxy S5 houses the Selective Focus feature, which allows you to adjust the focus of the shot after the image has been taken.  This is similar to Lumia handsets, and, you only have to wait 0.3 seconds for the auto-focus speed, great for capturing moving subjects. There are varied opinions about Samsung Galaxy S5’s processor probably because it might produce a different processor depending on distribution region.  Just like its predecessor, the Samsung Galaxy S5 is expected to have two different versions of the handset.  In UK and in most parts of Europe, this Galaxy series will be getting the Snapdragon 801 quad core processor, while users in Asia and in Middle East have a 2.1 GHz octa-core Exynos system.  There are significant differences except that LTE, Samsung’s contracted maker of processors, does not have license agreements to other countries.  The Galaxy S5 will be running on the latest version of Android Kitkat.

It is a fact that Android user experience dilemma in trying to preserve battery life for their smartphones, which is actually quite a challenge considering that applications consume most of the battery life plus other background programs.  From S4’s 2,600 mAh, Galaxy S5 is now hyped up with 2,800 mAh, bringing more battery life to the handset.  This is despite the AMOLED display, 16-megapixel camera, and other applications.  Samsung is also equipped with the Ultra Power Saving mode, where the display turns black and white when the battery level goes down to 10 percent.  Another notable upgrade to this Galaxy breed is the super fast Wi-Fi connectivity powered by LTE.  Samsung also added a proprietary tool called “download booster” to speed up processes for downloads exceeding 30MB in size.

Bundled with exciting applications, the Samsung Galaxy S5 features free and limited access to some of the most in demand applications in the market today.  This includes 1-year free premium service of RunKeeper, free 50GB Dropbox valid for two years, 1TB Bitcasa storage for three months, 3 to 12-month subscription of Evernote, a $50 to any PayPal merchants, 12-month free subscription of Bloomberg Businessweek, and 6-month free premium service from MapMyFitness among other applications.

Like it? Share it!
Top 10 Most Remarkable Engineers of All Time < Previous
Top 10 Let it Go Frozen Cover Versions Next >